Since the mysteries of Rennes-le-chateau and Montsegur, not to mention the Cathar heresy, found their way into the public imagination, the Pyrenees has often been linked in various ways with the subject of the Holy Grail. This is not least due to the efforts of German Medievalist Otto Rahn, whose theories surrounding the connection between Montsegur and Monsalvat of Parzifal fame have found a receptive and varied audience. However, a very recent article by Alfred Llahi Segalas in an Andorran national paper (Bon Dia, 4th February 2019, p. 5) seems to present another line of inquiry regarding the presence of a ‘flaming chalice’ in Romanesque church iconography within Pyrenean Catalonia.

Within the cathedral of Valencia lies the ‘Sacred Chalice’, which is legendarily regarded as the Holy Grail (or at least, one of them). Allegedly, it was brought from Jerusalem to Rome by Saint Peter, and Pope Sixtus II then gave it to Saint Llorenc, who transferred it across the Pyrenees to Huesca, where it stayed until 712. Saint Llorenc then fled the Islamic forces and took refuge in the Aragonese monastery of San Juan de la Peña, near Jaca. It was then transferred to Zaragoza, and given to the King of Aragon, Martin the Humane (1356 – 1410) in 1399, who kept it in the Aljaferia Royal Palace until he died, whereupon it was transferred to the Royal Palace of Barcelona. In 1424 his successor, King Alfonso the Magnanimous (1396 – 1458) gave the royal reliquary over to the cathedral of Valencia, and in 1437 the chalice was also passed over to the cathedral.

The ‘Holy Chalice’ of Valencia Cathedral. Photo taken from: http://www.catedraldevalencia.es/en/el-santo-caliz_historia.php

The cup itself is generally contained in the 14th-century Chapter House, other than when it is used at the High Altar for specific celebrations. The principal part of the relic is the dark-brown agate cup, which was dated in the 1960’s by archaeologist Antonio Beltrán to between 100-50 B.C. and ascribed an ‘Oriental’ origin. The stem and handles are later additions, and the alabaster base is Islamic in design. There is also some Arabic script on the foot of the chalice. 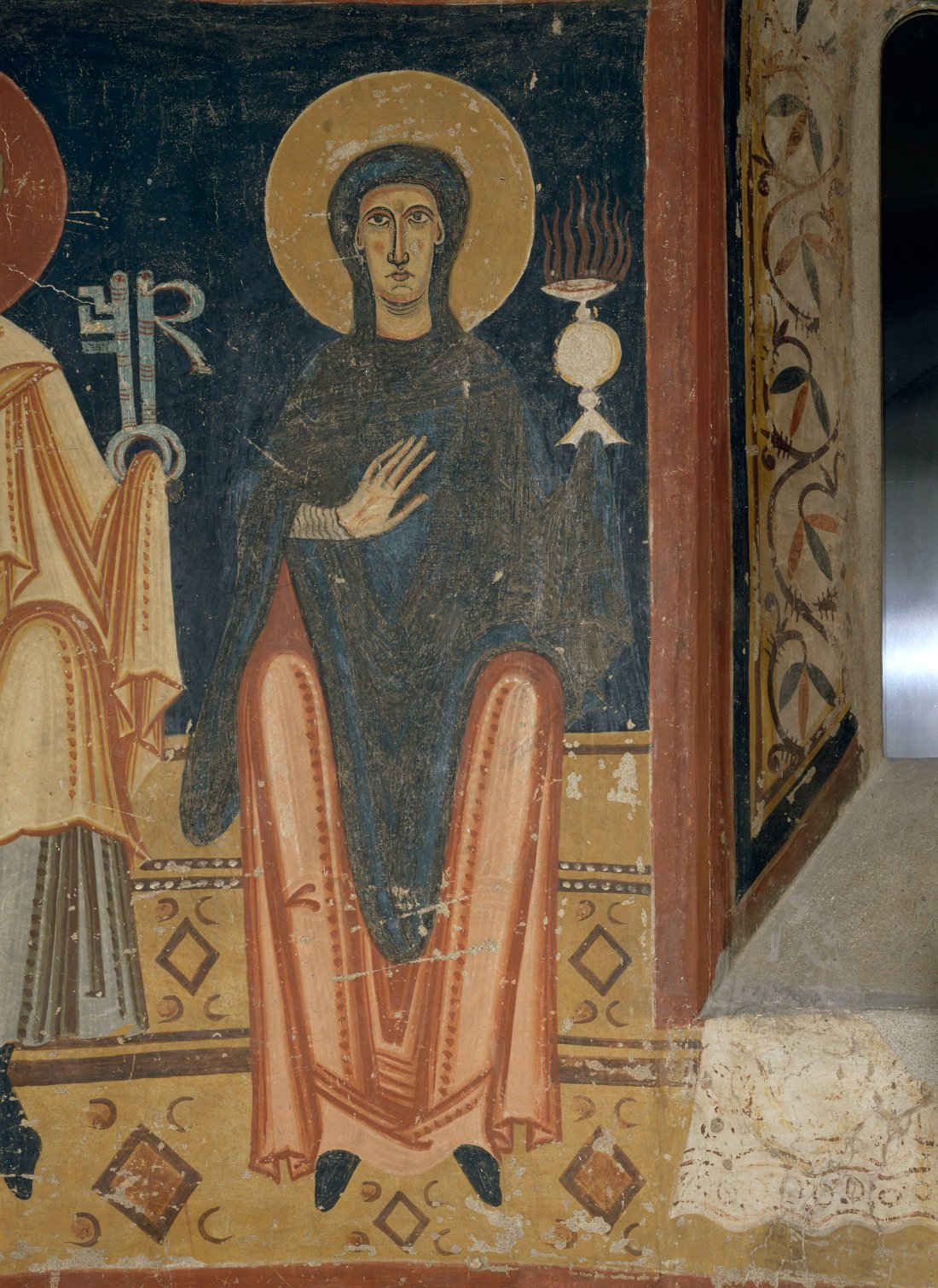 Professor Vincent Zuriaga (professor of Art History at the Catholic University of Valencia) in a 2008 presentation on Romanesque frescoes suggested that the iconography of the Virgin holding a flaming chalice may be a representation of the Holy Grail. Coincidentally, or not, the only four Romanesque churches in the world that have such a motif in their wall paintings are found in the Pyrenees, including one in Andorra. These churches are: Sant Climent de Taüll (Alta Ribagorça), Santa Maria de Ginestarre & Sant Pere del Burgal (Pallars Sobirà), and Sant Romà de les Bons (Encamp, Andorra). The latter also contains a very fine fresco depicting St John’s apocalyptic dreams, and some rare examples of paintings of livestock – a scene usually considered too hum-drum for inclusion. Zuriaga also suggested that the singular presence of these frescoes in the Pyrenees, combined with the legend journey of the ‘Sacred Chalice’ through the Pyrenees to the monastery of San Juan de la Peña, indicates that it is possible that the chalice was the object referred to within these four frescoes. Whether this hypothesis is correct or not, and if so, whether the chalice in question was represented from hearsay or an artist’s direct interaction with it, is impossible to say, however the unique presence of these four representations in such a small area of the Pyrenees (and indeed, the world), gives one pause for thought!