Across in the Alps numerous processions involving the Perchten and Kampus figures take place during the twelve-day period of Rauhnacht, typically starting on the winter solstice, all designed to banish evil spirits and usher in a new yearly cycle. These celebrations are archaic and fascinating, and well recommended to anyone who has a taste for the primordial and rustic. An excellent thesis to consult on this matter is that of Dr Molly Carter, ‘Perchten and Krampisse: Living Mask Traditions in Austria and Bavaria’ (2016, University of Sheffield). The Pyrenees are, as usual, a lesser known element in this regard, however, they hold their own rural winter customs, and below we shall briefly address some of the most interesting that surround the Christmas period. 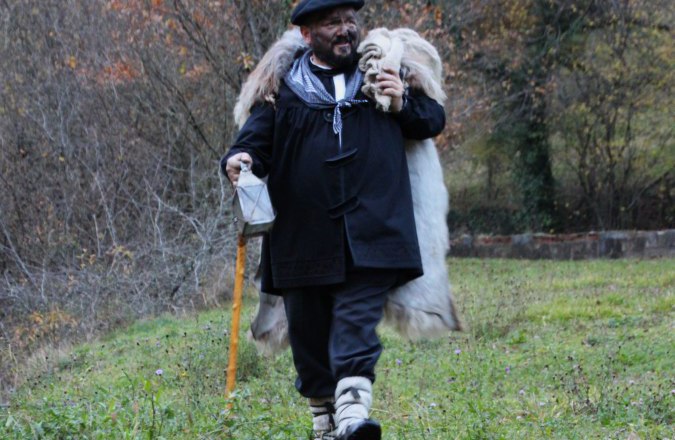 A man dressed as Olentzero, walking from village to village. Photo taken from https://i0.wp.com/aldaiaberri.eus/

In the Basque country, boys fashion a guy-like figure known as Olentzero, placing him in the chimney corner, a scythe in one hand and his head a created from a cauldron. He is taken out when they go singing on Christmas Eve, and it is said that the name Olentzero has some etymological reference to Christmas Eve, perhaps acting as a personification of the season, some archaic memory of another, older representative of winter? His current role is to declare Christmas throughout the Basque country (despite being ‘banned’ by the Franco regime as a symbol of regional separatism) and leave presents next to each family’s shoes, the latter being neatly arranged in the centre of the room on Christmas eve. He is also said to descend from the mountains on a divine horse, presumably to make it around to each house in time during this single night. His post-Franco incarnation is a rather more sanitised and family-friendly version. Prior to his repression, Olentzero was in various Basque regions said to have either three eyes or blazing red eyes, and to cut the throats of children who did not go to bed or those who broke the tradition pre-Christmas fast with his sickle. He is commonly said to descend from a race of Basque giants, the jentillak, with some legends claiming that the giants, after throwing an old man from a cliff who did not wish to live through the Christian conversion, tripped and fell off the cliff themselves except for Olentzero, and other purporting that the other giants simply left and Olentzero was the only one who stayed and embraced Christianity.

On the night of the 23rd December in the Basque valley of Roncal (or ‘Erronkari’ to give it its Basque name), after the so-called ‘cock’s mass’ at midnight (the ‘Misa del Gallo’ also recorded as occurring in Mexico in 1843), rough and ready music is made in the street, great fires are lit in the snows, and bells and saucepans are struck, producing a clattering cacophony as the flames are whipped up by the night air. The men then retire home and, on the dawn of the 24th, they burn a log they cut earlier in the year specifically for this date. Does this perform a similar function to the Yule log, that tradition so beloved in Scandinavian and Germanic societies? The burning of a specific piece of wood in the dead of winter seems common across many European cultures, which may point towards a much older commonality in terms of tradition.

They then go out wassailing, half in Spanish and half in Basque:

With this cold a bit of bread…’)

The night of Christmas eve, villages in this area perform mock raids on each other, staging pitched battles with sticks and announcing their attacks with pealing bells. Certainly, this is not the time of solemn Catholic observances in this valley!

On a more scatological note, one finds in the valleys of the Catalan and Aragonese Pyrenees (and through these regions in general), very remarkable phenomenon in the form of a humble log. This log, the ‘Tió de Nadal’, the ‘Christmas Log’ (more commonly known as the ‘Caga Tió’ or ‘Shitting Log’, for reasons that will become apparent), has in recent times been dressed with a miniature red berretina (sock hat), stick legs, a nose and a face painted onto one end, however in days gone by it was simply a rough, dead piece of wood or slice of log. This piece of wood is traditionally kept inside from the 8th of December, the feast of the Immaculate Conception, fed (symbolically) nightly and wrapped in a woolen blanket to keep it warm. Come Christmas Eve (or Christmas Day, the timing varies), the niceties end, as the log is placed partially in the fire and ordered to defecate small presents. The children beat the log with sticks, sing songs and order it to fulfill its function, before leaving the room. Upon their return, the log will have magically secreted various small, edible presents (an unusual choice given the method if dispatch!) beneath its blanket. 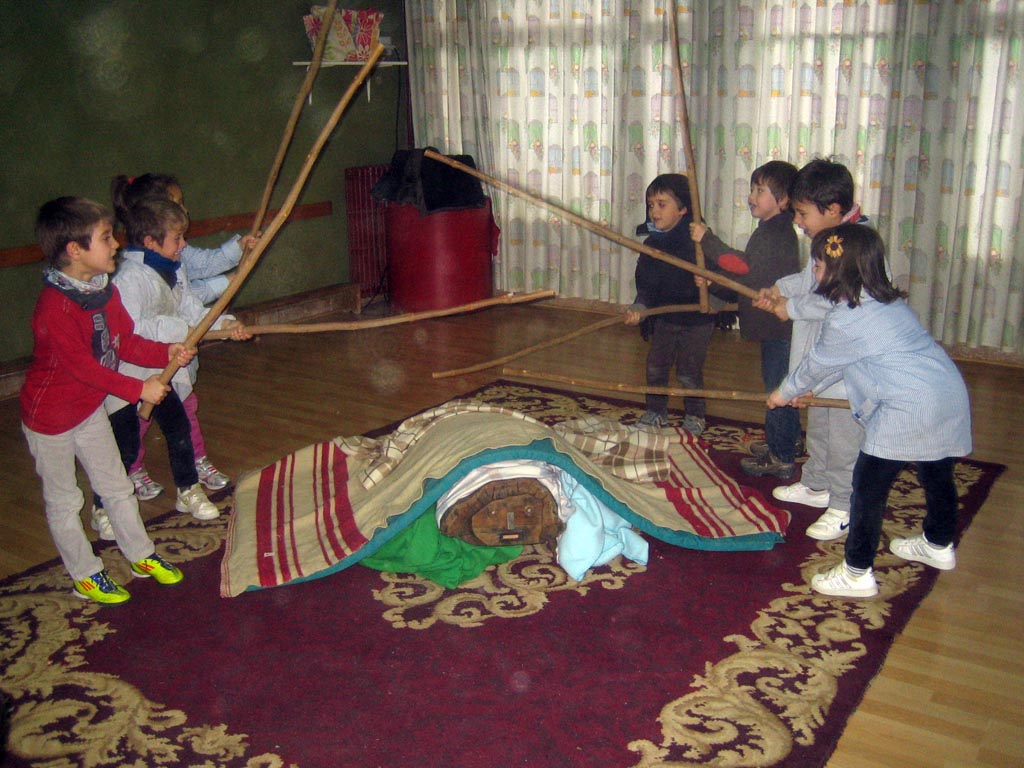 The unfortunate log being beaten by children, in the hope it will produce presents for them. Photo taken from: http://m.claver.fje.edu

In Arudy, Béarn and Aragon, shepherds traditionally stationed their flocks around the church during midnight mass on Christmas Eve, taking one lamb inside, decorated with a ribbon and freshly washed, to offer it to the priest in return for a blessing. Similarly, in the Basque village of Labastida in Alava, groups of shepherds surround the church dressed in pelts, recite verses and perform simple dances to honour the midnight mass. 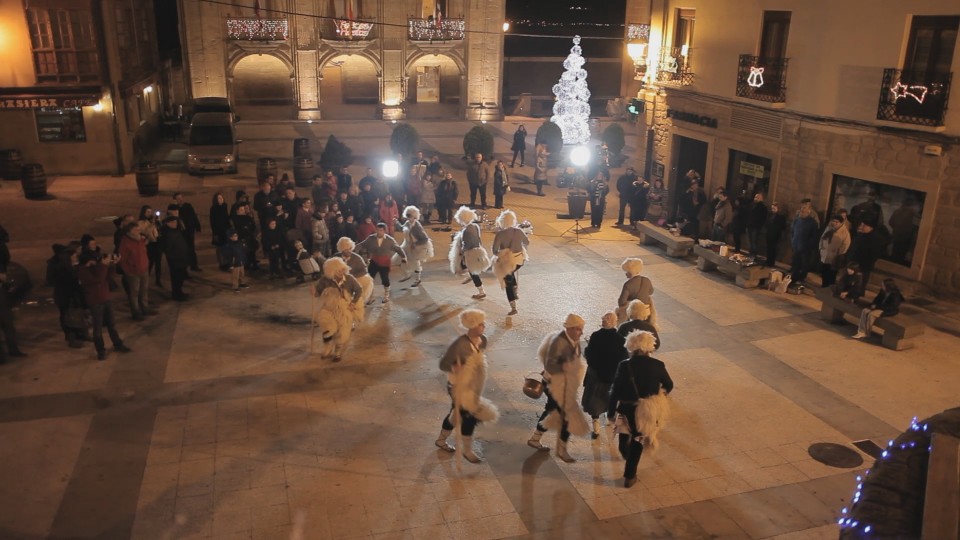 The ‘Danza de los Pastores’ (Dance of the Shepherds) in Labastida. Photo taken from: http://www.eitb.eus

A darker tradition on this night can be found in the Ariege, where one must provide food for the dead on Christmas eve if one wants to avoid violent and frightening repercussions. This is to be achieved by leaving out a loaf with a knife stuck in the middle, whilst one is out celebrating midnight mass, thus allowing the dead to feed with impunity in deepest winter….

[…] descend from his mountain on a horse, and roam the land leaving presents in peoples’ shoes (see https://perennialpyrenees.com/2017/12/19/article-20-christmas-customs-in-the-pyrenees/). The implications of this are discussed later in this article. Several of these megaliths and […]