I was moved to write this brief article after watching (finally) ‘The VVitch’, whose real star is none other than the devilishly charming billy goat known as ‘Black Phillip’. But Black Phillip is far from alone, he has many counterparts across Europe, not least in the Basque Country, where his alter-ego Akerbeltz lurks underground, in the caves and in the forests of that mysterious and archaic region, especially in Zugarramurdi where elves and witches meet.

Akerbeltz (‘Aker’ mean billy goat and ‘beltz’ means black – the Basque are nothing if not literal in their language), is a popular Basque folk spirit who can be seen represented at numerous processions and folkloric gatherings throughout the region, and he also has numerous servants in the form of elves. Unsurprisingly, given his manifestation as a goat, the post-conversion religious landscape of the Basque Country linked Akerbeltz with the devil, however more nuanced recent folklore studies have linked him with the role of protector of animals, the herd, and in some cases, houses, and ascribe to him the potential as being an echo of a far more primal, complex deity from the Basque pagan past. Several Roman inscriptions exist which refers to ‘Aherbelste’, believed to be a Romanised version of the name Akerbeltz, indicating a definite pre-Christian existence in the area, possibly as a god in charge of protecting livestock and general fertility. Folklorists have also suggested that he shares some characteristics with the great Basque goddess Mari, who surprisingly took the occasional form of a black billy goat.

The worship or presence of the billy goat in folklore and religious lore within Europe is far from rare – Thor’s goats Tanngrisnir and Tanngnjóstrone who pull the thunder god’s chariot, and the popular northern European tradition of the Yule Goat spring to mind. One only has to look at examples such as Dionysius or Pan (to take two more famous cases) to see that the goat (and many horned creatures) have served as models of fertility, protection, and passions within the pre-Christian European past, and often they too were transformed into devilish figures within the Christian mythos. In Akerbeltz’s case, he became linked with witches’ Sabbaths, known as Akelarreak (witches’ covens), named after the pasture lands where goats grazed.

Akerbeltz too is seen as a figure of fertility, however, aside from his protectorate role (discussed below), he also is linked to storms, being able to whip up tempests and call down hail storms at will. It is a belief in the Pyrenees that the Devil, witches and Akerbeltz could all go to a stable, cut off the billy goat’s beard, and use it to call down terrific thunder and hail storms! In Freser (Catalonia) a saying still exists: ‘A la casa han tosa la cabra, aquesta tarde tindrem pedra.’ (‘They have cut the beard of the billy goat, this afternoon it will hail.’) 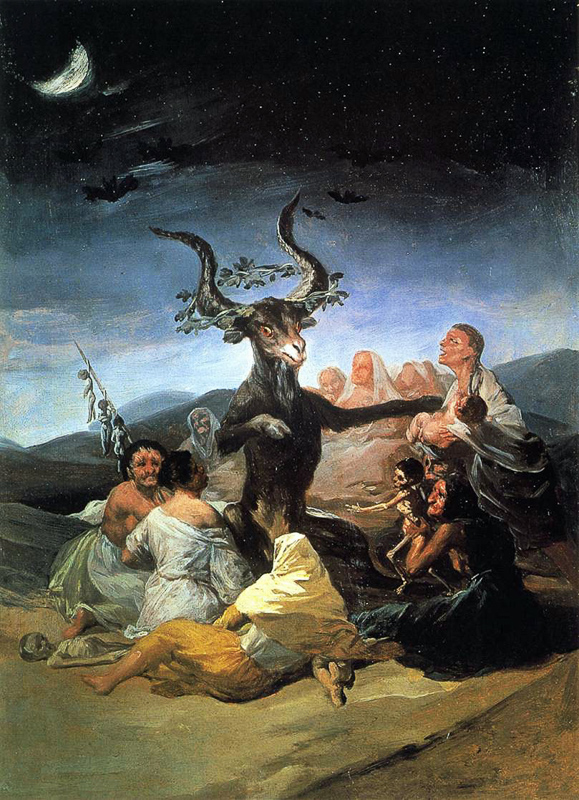 In his protective role, Akerbeltz is believed to care for domestic animals left in his care, and even cure them of disease in some cases. For this reason, many Basques traditionally have a black billy goat in their stable as a representative of Akerbeltz, to ensure their livestock are protected from any malevolent force or predator. This two-sided nature has also given rise to the legend that Akerbeltz possesses two faces, one for his benevolent role and another for his malevolent character.

Several legends surround Akerbeltz. At one point a priest enters one of Akerbeltz’s caves carrying a consecrated host. Whilst he was touching the gold cross he wore around his neck, a snake appeared from the darkness and tore his hands off, together with the gold cross. As the poor priest fled the cave an ominous voice could be heard from the depths, saying ‘Be thankful you were wearing your gold, if not I would have kept you here instead.’ The priests of Urepel have tried several times to pray Akerbeltz away from their caves but, apparently, he refuses to leave. Akerbeltz is also said to be fond of the caves near Balgorri, where his spirit is said to wander frequently at night. One can still see Akerbeltz celebrated in the annual Festival of Witches at Zugarramurdi, and some Basques say he can be seen or sensed during the summer solstice celebrations held high in the Pyrenees…