Disclaimer – Under Spanish law, apparently, it is forbidden to take photos of archaeological artefacts found ‘in situ’ or even to describe them, if one does not have a permit for archaeological prospection. So, it should be formally stated here that (for legal reasons) any descriptions of surface artefacts here are based on hearsay from other sources unrelated to Perennial Pyrenees.

(View down towards Peramola, with Roca del Corb on the right and Roques de Sant Honorat on the left)

Recently a visit was made to the Peramola municipality near Oliana in the Alt Urgell, Catalonia, to examine some fascinating archaeological sites. This area is heavily wooded and is situated at the very beginning of the Pyrenean foothills. Stretching away down to Barcelona lies a far gentler undulating series of hills, so gentle in fact, that one can just about make out the imposing mountain of Montserrat in the distance, rising impressively out of its surroundings. The village of Peramola itself possesses a wonderful Lombard Romanesque church in the cemetery, dedicated to Sant Miquel de Paramola, and the church of Santa Maria de Castell-llebre, which stands on a rocky spur and has an unusual square based belfry.

The whole region offers a wide and excellent set of archaeological and even palaeontological sites, and one of the main reasons for this is the presence of the River Segre that flows through it offering good communication and trading possibilities. Sites range from one of the world’s largest fossilised dinosaur nest in Europe (just to the north at Coll de Nargo) to prehistoric engravings and rock shelters/cave sites, Medieval graffiti, Romanesque churches and troglodyte dwellings that were also used more recently to shelter refugees in the Spanish civil war. The nearby town of Oliana is said to owe its origins to a Roman colony, and possesses a very fine Romanesque church and a castle. 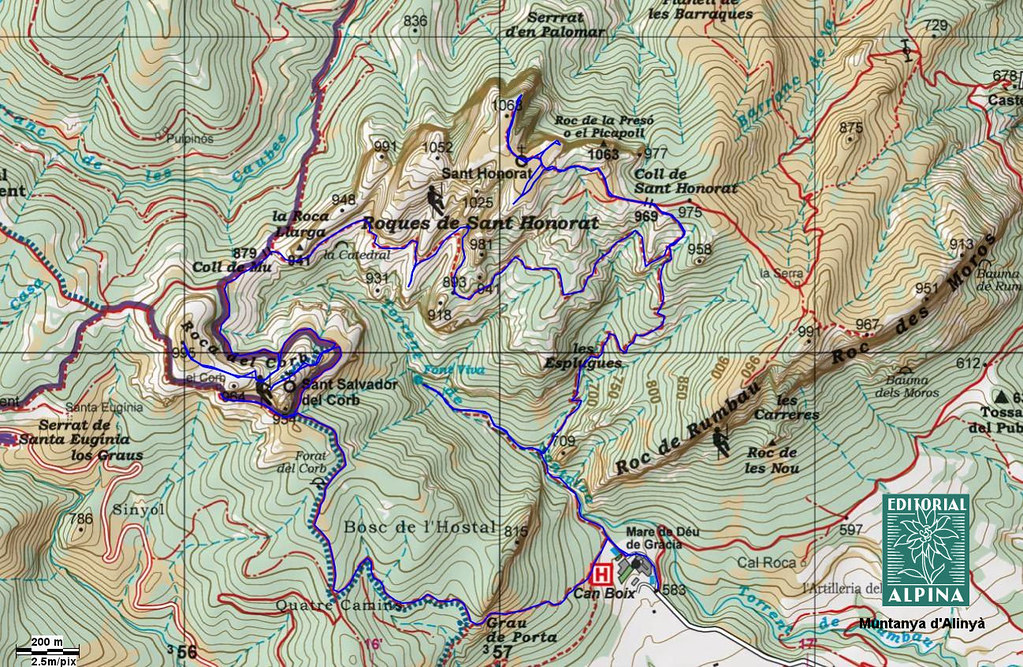 In a nearby, heavily wooded valley, The Roca del Corb (‘Rock of the Crow’) and Roques de Sant Honorat (‘Rocks of Saint Honorat’) are popular with walkers and rock climbers alike due to their unusual shape and excellent views, and for possessing the largest natural rock bridge in Catalonia. Below them in a ravine, the Rumbau river flows south east down towards the Segre. Due to the heavy vegetation, steep inclines and multi-hued stones that litter the floor (a mixture of riverbed sediment and washed stones that have hardened into a concrete like deposit), little to no field-walking or archaeological surveying has taken place here, despite the obvious presence of some highly interesting sites (recorded by Catalan archaeological services). The Roca del Corb was first occupied in Prehistory and has seen sporadic settlement in various forms ever since (1). Given the abundance of possible rock shelters and caves around the Roca and in the ravine below this is hardly surprising, especially with the Rumbau river at hand and the surrounding forests offering hunting and foraging possibilities. At the base of Roca del Corb lies a troglodyte house (‘Casa del Corb’) built around a cave in the rockface. Its origins are unknown, but it is recorded as being inhabited up to the early 20th century. The interior is 20m by 25m and has a well-preserved oven. Records indicate the site was first inhabited during the Neolithic, which given its situation (shelter, visibility, resources) is unsurprising (2).

Perched atop Roca del Corb is one of the smallest Romanesque chapels in Catalonia, dedicated to San Salvador. Occupying one of the needle-like formations of the Roca, its precarious position offers an amazing view and a truly unique setting, with the cliffs plunging down 50 feet on three sides. The church has been dated to the late 11th century, and is built in the Lombard Romanesque style, although it is currently in a ruinous state with no surviving roof (1). The apse holds a niche in which a modern sculpture of the Virgin rests, and a small window in the centre of the apse looks out to the north. A fascinating feature of the church (albeit unintentional on the part of the builders) is the use within the walls of two large chunks of a Neolithic mill/quern stone made of granite.

This poses an interesting question; seeing as the location of the chapel makes it unlikely that anything other than (very literally) immediately available stone would have been used during construction, these fragments must have been found around the Roca del Corb. This would, therefore, indicate a food processing site either on or around Roca del Corb, which leads to further speculation about Neolithic settlements and early agricultural activity in the same area. On another plateau of the Roca de Corb, I have been informed that a fragment of sandstone which strongly suggests the shape of a grinding/quern stone has recently been sighted (a definite circular curvature on the outside, worn smooth and ‘dish’ shaped on the interior – diameter uncertain). Other finds on this plateau adjacent to the chapel have been said to include fragments of possibly Roman pottery, a blue gaming piece, glass fragments and ever traces of iron, leading to the suggestion of a possible metallurgy site. The great mystery is that this site is almost inaccessible – only now possible through the use of a climbing chain – so the alleged presence of all these finds (including those relating to industry and food processing) is peculiar, to say the least.

An interesting aside is the presence of ‘Corona del Rey’ (‘Kings Crown’ or ‘Pyrenean Encrusted Saxifrage’ – Latin: Saxifraga longifolia) along much of the Roca del Corb. This alpine perennial is very hardy and can grow up to a foot across before putting out a stem that forms a cascade of white blossom, announcing the plant’s death. This plant has ‘medicinal’ qualities that relate to abortion, and local folklore tells that it was favoured by queens so that they may eradicate any evidence of ‘extra-curricular activity’ whilst their husbands were away fighting or touring the kingdom!

At a lower level, the Col du Mu links the rock formations of Roca del Corb and Roques de Sant Honorat. Allegedly there are the remains of a cremation site here which may date back to the Bronze age, with detectable burnt soil, fragments of cremated bone and small flecks of bronze detectable on the surface. However, the combination of neither preservation nor excavation efforts and the passage of vehicles (not to mention walkers/climbers) over this tiny site has rendered it crushed, and no doubt the stratigraphy is highly compacted or disturbed.

(An anthropomorphic tomb cut into the rock)

In the ravine below these two rocks and the Col lies a very curious site indeed. Amongst the heavy tree cover, boulders and smoke blackened caves/shelters lie a series of anthropomorphic tombs cut into the rock-face of the Col. These tombs are commonly known as Olerdolana (named after their prevalence in the Olerdola municipality outside Barcelona), or rupestres anthropomorphic in Spain, and are present across the Peninsula as well as in Britain, France and further afield. They are primarily identified in Iberia with the Late Antique/Medieval period, which may place them within the Visigothic or Frankish periods, especially the former given the popularity of this necropolis style with this culture. The local name for this site is ‘Cementiri del Moros del Coll de Mu’ (The Cemetery of the Moors of Coll de Mu’), however anything which is slightly unknown in terms of origin tends to be ascribed in folklore to ‘the Moors’, so this reference should be taken with a pinch of salt (2). There appears to be a red staining around the head areas, which may be remains of some form of paint (it does not appear to be linked to an oxidation process or staining of the rock naturally). Five tombs are present in this necropolis however no remains are visible within them, filled as they are with compacted soil, stones, vegetation and other detritus. No doubt they would benefit from sampling.

Further along, reaching into the rock-face of Roques de Sant Honorat is the cave known as the ‘cathedral’. Some of the walls are blackened with what may be soot, however, the extensive interior of this cave is overgrown and nothing remains to indicate occupation. Yet, it would seem an ideal spot for some form of habitation, occupying a prime site that is sheltered, extensive (perfect for spatial allocation in terms of food processing, sleeping, even industry), near an excellent water source and easily defended. Allegedly some fragments of what appears to be crudely made Medieval pottery have been spotted on its floor, which combined with the soot-stained walls may indicate some form of presence here during this period – possibly hunters rather than herdsmen, or indeed there may have been some form of industry down in this ravine that we are unaware of now due to the heavy vegetation obscuring all evidence.

Evidently both the Roca del Corb, Roques de Sant Honorat and the ravine below with its river has seen a high amount of human occupation and exploitation throughout the ages, which is to be expected given the resources/aspect of the sites, and the proliferation of similar sites throughout the region (and indeed Catalonia as a whole). Further studies of these sites would yield useful information in terms of shifting patterns of land use, and potentially comparisons could be drawn between settlement/exploitation patterns in these Pyrenean foothills and the High Pyrenees. The presence of the anthropomorphic tombs, however, is of great interest, and points towards the question of why choose such a place for internment in such a deliberate and labour intensive manner? Was there a nearby settlement associated with these burials, as surely Peramola (for instance) is far too great a distance to carry bodies through such vegetation and inclines for internment? Were they related to as yet undiscovered troglodyte dwellings, such as Casa del Corb? A mystery indeed, and one to which that landscape is not going to yield any easy answers.