This week saw an early morning expedition to the ‘Roc de les Bruixes’ (Witches’ Rock) in the parish of Canillo. This rock is covered with intriguing carvings and lies in the forest directly overlooking the Meritxell sanctuary (see Weekly Article #8). Recent snowfall had covered the pastureland through which the trail led, with birds of prey wheeling overhead and a mixture of jays, blue tits and thrushes singing in the trees; a very lovely start to the day! The rock itself is buried deep in the woods, and the iron sign that indicates its location off the path and up the mountain is long gone, so it remains blissfully secluded and protected from casual visits. 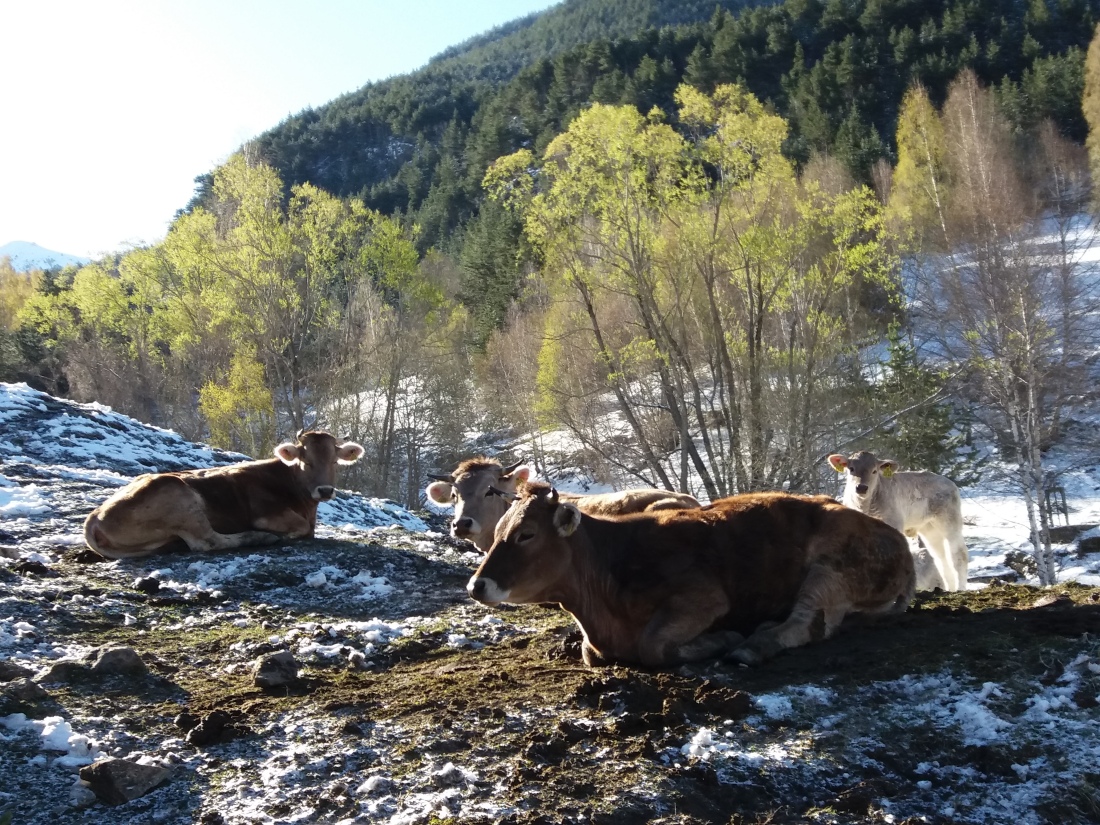 The legend attached to the rock is a particularly lurid one, even by the standards of Witchlore. The carvings are in fact said to be prehistoric, but popular folklore attributes them to the following event. Frequently witches would gather upon the rock and cast spells, and at times the Devil would appear uninvited and interrupt their work. Eventually, they grew so irritated with his interruptions that, on one occasion, they took him in their arms and hurled him off the rock, and the carvings are the scratches left by his long talons and he struggled to find a purchase on the stone before crashing into the forest below.

Another piece of folklore from the area tells of a man returning one night from Encamp to his home in Canillo by the crossroads near Meritxell sanctuary, who suddenly spied a woman standing completely immobile under the rays of the moon. He greeted her politely but was shocked to see that she was, to put it bluntly, topless, and whilst she wore a long black skirt he couldn’t keep his eyes off her chest! She noticed him and walked quietly towards the man, with her arms outstretched and long black hair blowing in the wind. The man took a step back nervously but the lady told him not to be afraid, and that he should come towards her. The man considered that either she was a phantom, or that she was quite mad, there being no other reason in his mind for standing topless under the moon at midnight. He wanted to flee, but could not, and soon she was standing before him. Closing his eyes to break the spell, he took several steps back, but then he felt himself come into contact with something soft and warm – the lady had appeared behind him! She drew him into an embrace and as soon as he felt her warm skin on his cheek his fear left him. Suddenly he felt himself falling, and the woman was laughing at the sherds of rock that became kicked up by his flailing feet as he seemed to be tumbling down a precipice. At that he cried out ‘Our Lady of Meritxell, save this poor sinner!’, where upon he opened his eyes and found himself in bed with a cry. His wife awoke and demanded to know what was going on, whereupon he told her the whole nightmare. Less than sympathetic, she berated him for having too large a dinner and it sitting heavily in him, thereby giving bad dreams. He nodded his assent in the darkness and eventually drifted back off to sleep. However, when he woke he found in his right hand a torn piece of the black skirt worn by the mysterious lady of his dreams, and the poor wretch never had a full night’s sleep again (Patlapin, 2008). 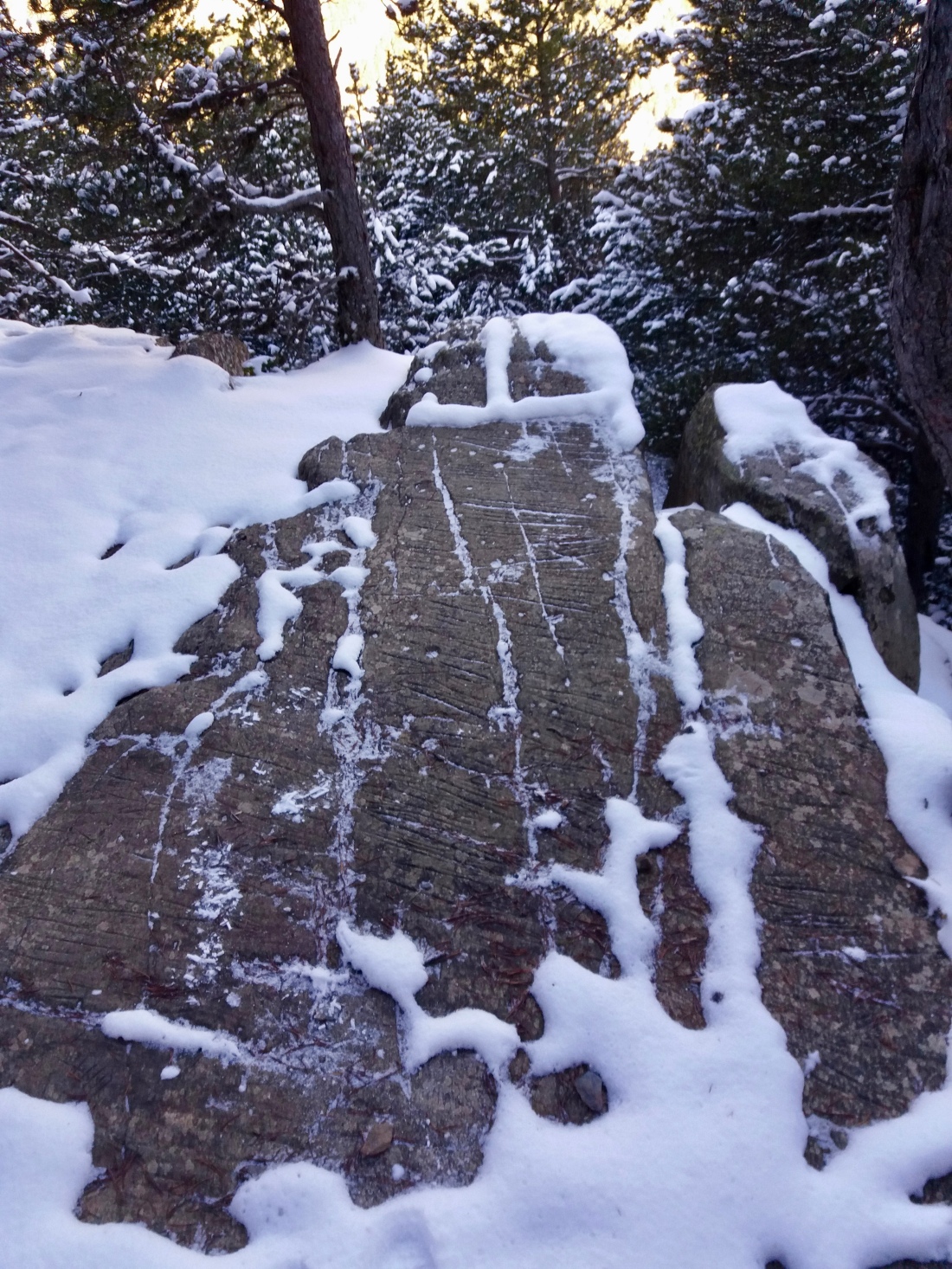 The situation of the rock, chosen no doubt for its slab-like horizontal quality (enabling carving with great ease), roughly 5m by 3m, and its imposing position above the valley floor, is interesting, as it is not easily accessible or even visible apart from when very nearby due to the forest. One interesting aspect of the rock’s location is its proximity to the Meritxell sanctuary, or rather, chronologically, the proximity of the sanctuary to the rock. It is highly coincidental that these two sites should be quite to close, and one wonders if the siting of the Meritxell sanctuary directly beneath the rock (on its footprint would have been impossible) was an effort to stamp Christian authority on a valley whose carvings lingered in the population’s folklore, memory and potentially folk-practises. This is, however, conjecture on my part, with no evidence, merely based on comparisons with other pre-Christian sites upon or adjacent to whom a church is built.

Many of the linear carvings seem to have been made by a sharp tool with a wide centre section, likely through wearing the rock down with a forward and backward motion, hence the depth in the centre of the carvings. The carvings on the rock have been compared to those of Olargues in the Midi, and diverse sites found in both the Pyrenees-Orientales and the Ariege, and have been said to be a development of their style. Similar symbols and figures can be found in sites such as Mont Bego and Val Camonica (Alps), Cantabrian schematic art, Galician petroglyphs and Iberian schematic art. What we are dealing with it seems is an iconographical canon that has its counterparts from the Alps to the Western coast of the Iberian peninsula.

The main subjects that are represented are pines, arrows, kites, pentacles, ‘grill’ shapes, ‘hopscotch-like’ grids, networks of lines, radiating lines from a central point and a rough series of cupolas or bowl-shaped indentations. Interestingly, the majority of the lines tend to run roughly East/West, unified by rarer North/South incisions through their middle. On the Eastern side of the rock there is an extraordinary carving of two men, one of which is holding what appears to be a sword/spear. Overlying these figures is a mess of lines which appear to be an attempt to destroy them. The godfather of Andorra archaeology, Pere Canturri, suggested that these figures were, in fact, Medieval, due to their depicted costumes of skirts, helmets, and weapons, and posited that this may be a reference to the wars between the Count of Foix and the Bishop of Urgell in the 12th century (Canturri, 2003). 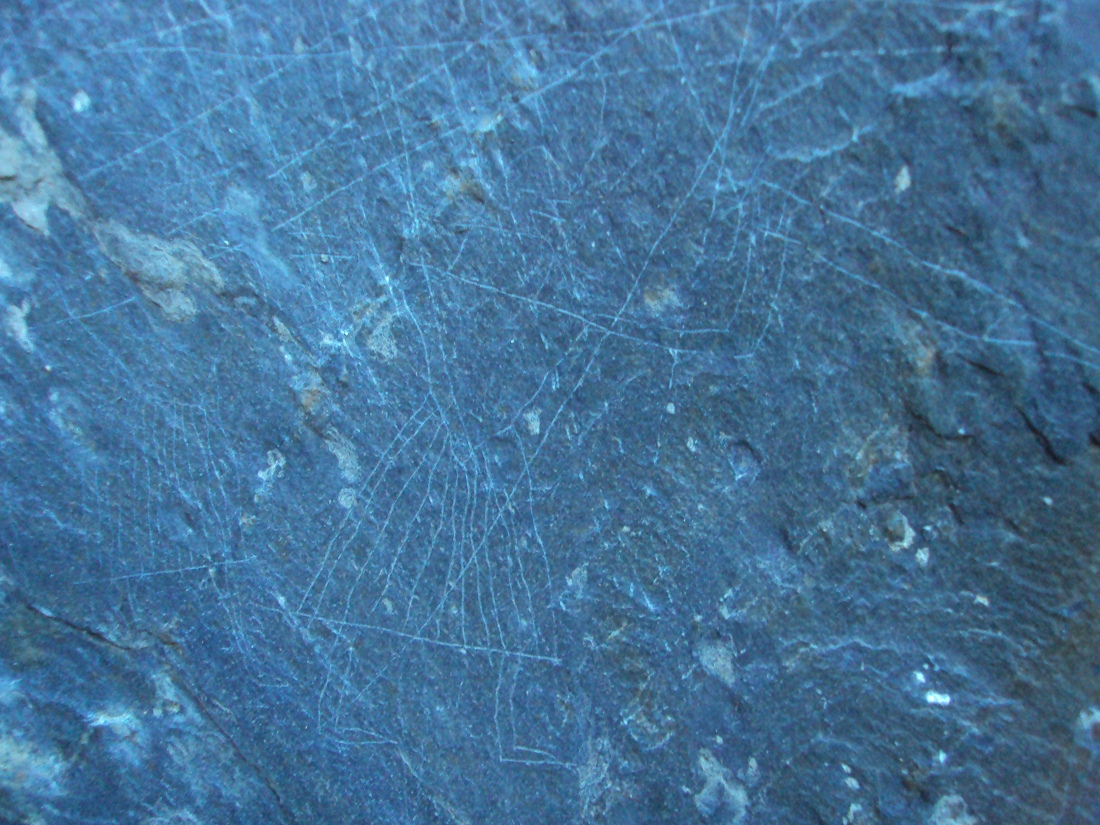 (The potentially Medieval carvings on the rock’s eastern side)

The comparison to the carvings found on the ‘Peyro Escrito’ (‘Written Stone’) of Olargues is interesting, these being Bronze Age in date, which helps to place the activity of the Roc de Bruixes in an historical context. Both feature an extensive series of incised lines, radiating lines from a central point, pentacles (rough) and the peculiar ‘hopscotch’ carvings. French archaeologist Pierre Campmajo has proposed that some of the carvings on the Roc de Bruixes may be remnants of an Iberian script, similar to those found in the Cerdanya, and when one examines the carvings studies in the Cerdanya there are certainly some similarities between certain carvings (Campmajo & Ferrer i Jane, 2010). Another site nearer to Andorra is that of Tossal de Cava in the Alt-Urgell region, which has a number of carvings which are extraordinarily similar to those found on Roc de les Bruixes. 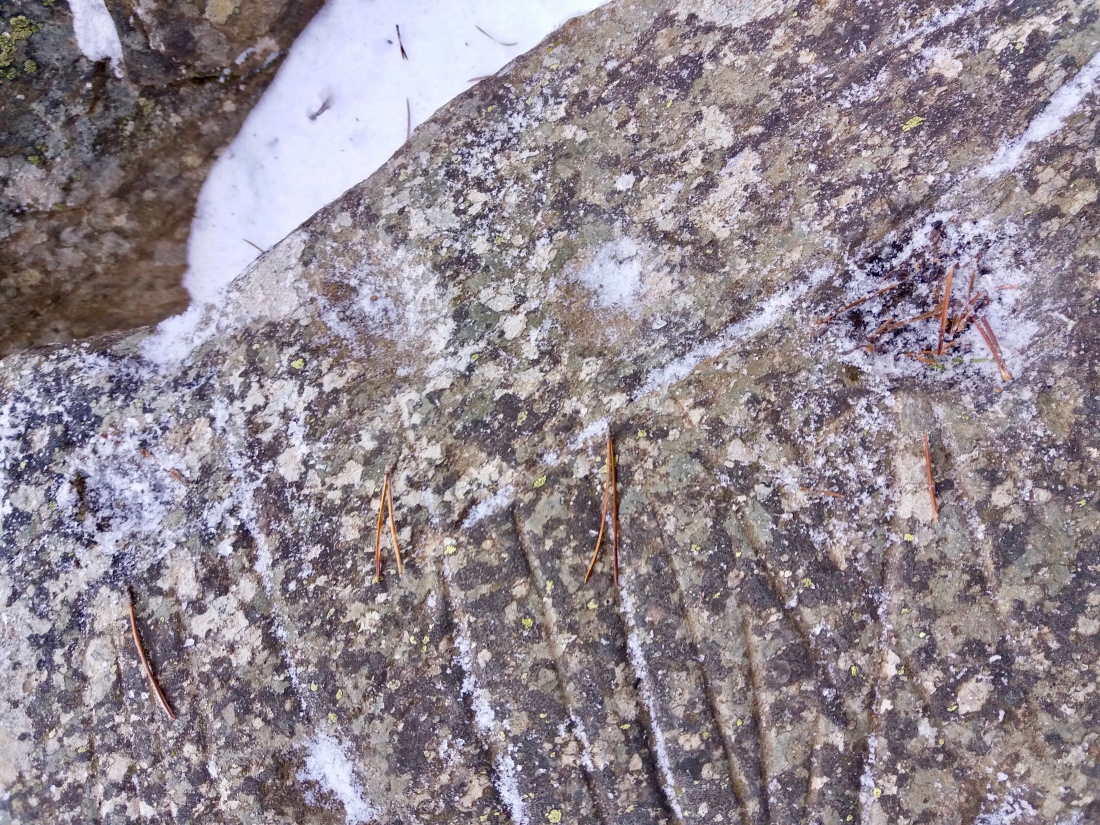 (The ‘cupola’ indentations, pooling snow in their centres)

The concave ‘cup’ marks are worth noting, as four of them form a rough line, and each one from which a linear incision leads out into the main body of the stone (these ‘cups’ are highlighted by a pine needle, the snow made for poor photography!). These may be anthropomorphic representations. 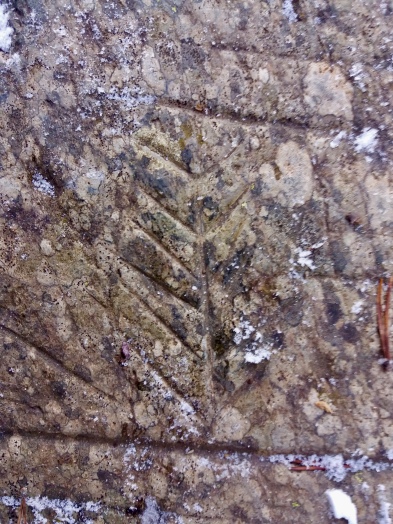 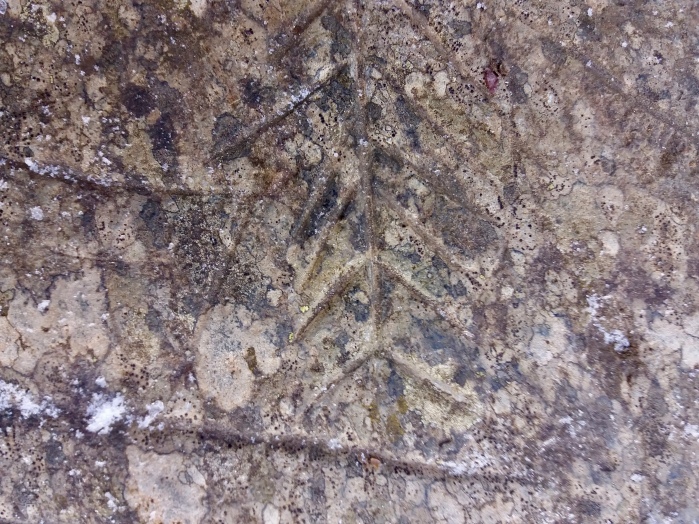 There are also several carvings which are said to represent pine trees, which is a logical interpretation given the fact that they surround the rock. 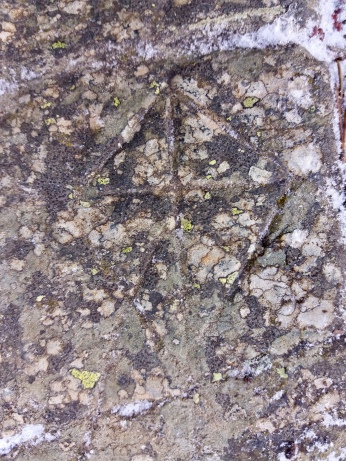 Another motif is this ‘grill’ or ‘kite’ shape, which may potentially be a stylised star, certainly the likelihood of these carvings being a kite is rather slim, surely!

Canturri suggests that one coagulation of lines might be a schematic representation of an Andorran house, based on similar carvings and their interpretations in Val Camonica, the Paris Basin and also in Olargues. 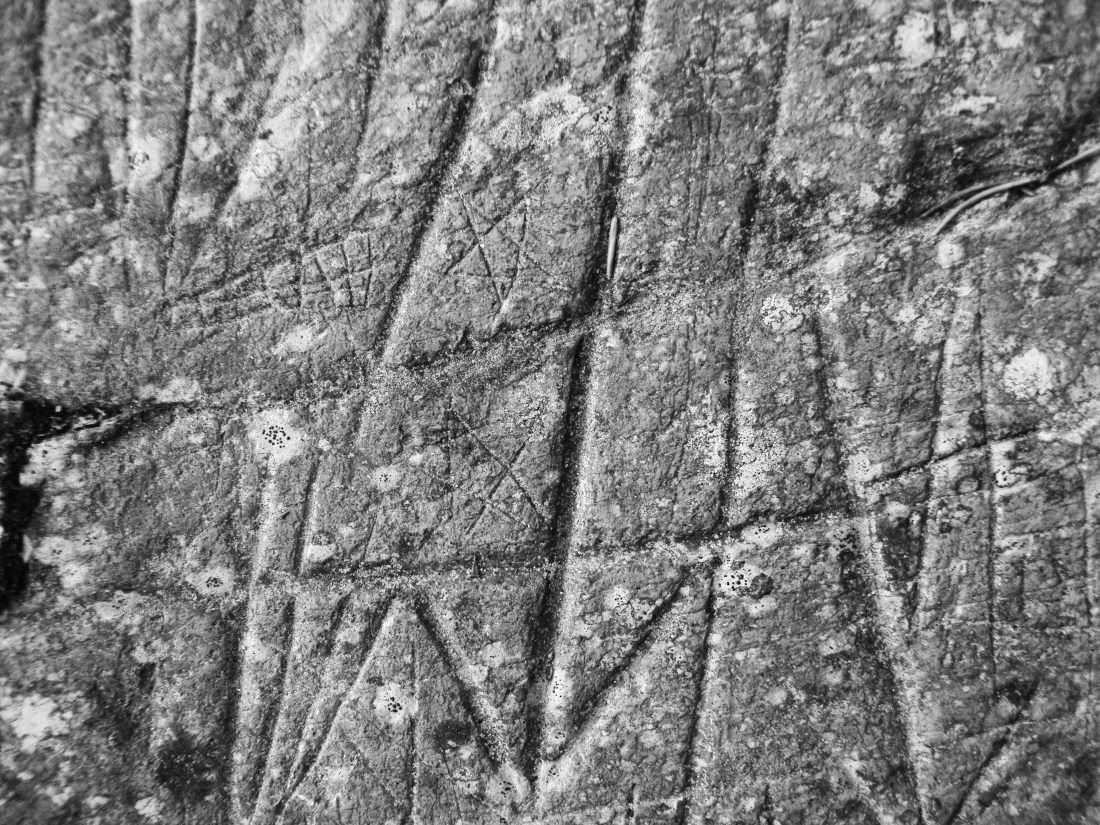 (Some of the many pentacles on the rock)

It is the pentacles however which particularly capture one’s attention, and several can be found on the rock. A fascinating discussion of the meanings behind pentacle symbolism in Western rock art (Coimbra, 2011) provides us with some potential interpretations as to their meaning/function. One particular interpretation which Coimbra applies to a site at the Coll de la Font Roja (Caixas, East Pyrenees, France) is of extreme interest, as it describes a pentacle in relation to a ‘figure composed of ten rays with a central cupmark and a kind of tail that may represent a meteor or comet.’ (Coimbra, 2011, 125). This is suggested to be a recording either of an astronomical event, and another carving on the same rock of a rayed figure, although this time with no tail, is interpreted by Abelanet as a solar symbol (1990). On the Roc de Bruixes, one finds three of these ray-like figures, often with pentacles nearby, so could this indeed be a representation either of the sun, astronomical events or perhaps even a form of religious symbolism, seeing as in prehistory we find a close kinship between astronomy and religion? 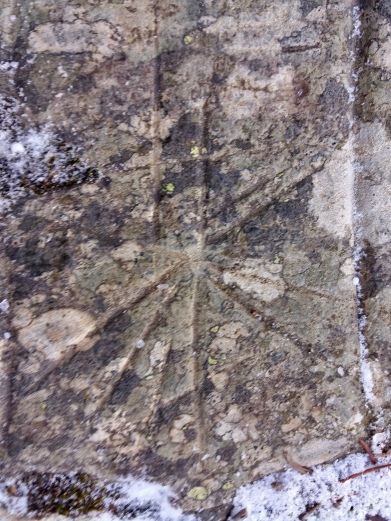 As is so often the case with rock art, the truth as to the meanings of the carving may never be known concretely. However, comparative studies with other sites of a similar date such as Val Camonica reveal a curious set of potentially ‘universalist’ symbols that tend towards those above and those below. The need to inscribe representations of ourselves, the world around us, and very possibly the stars, points towards a common and ancient desire to place ourselves, through art, in a relationship with the cosmos. Linking this into folkloric tales of the supernatural, of witches influencing storms and otherworldly beings appearing in broad moonlight, it is easy to see how sites such as Roc de les Bruixes can become symbols of man’s desire for influence over nature, and for knowledge of his position in the grander scheme of things. Whilst the rock may or may not have featured in genuine acts of witchcraft in the parish Canillo (although it certainly does in its folk memory), it seems very likely to have occupied a position of importance for observances in the archaic past. For that reason, it is perhaps a blessing that it remains relatively hidden in the deep woods, watching over the valley, accessible only to those who have a knowledge of the land.

Coimbra, F. 2011. ‘The symbolism of the pentagram in West European rock art: A semiotic approach.’ In Papers from the XXIV Valcamonica Symposium.122 – 129. Donwloadable here: http://www.ccsp.it/web/INFOCCSP/VCS%20storico/vcs2011pdf/coimbra.pdf

More (and better!) photos of these carvings can be found here: http://jordicasamajor.nirudia.com/3600

[…] preceding all that business, the giant mystic witches’ stone is different even from the walls of ancient houses, made of rocks and with heavy slated roofs, […]