(Looking from Montsegur to the Pic de St Bethelemy)

The Sabarthès is a canton in the Haute Ariege within the foothills of the Pyrenees, filled with caves, forests, waterfalls, peaks and lakes, and most importantly it has become a focal point for some of the most jaw-dropping and fascinating legends in France, many of which surround the Cathars and, perhaps most interestingly the Grail itself! The essence of these legends will be presented in this article; however, the future of Perennial Pyrenees will contain far more detailed analyses (including books and, possibly, tours) of these legends and their sites. This short article is merely an appetiser, and introduction to the mysterious and rather wonderful atmosphere of the Sabarthès canton.

The valleys of the Sabarthès are riddled with caves, and a Prehistoric presence here is undeniable, perhaps best exemplified by the ‘Grotte de Bedeilhac’. Extending for over a kilometre, within this cave one can find works of art from the Magdalenian culture (17,000 – 12,000 years ago), including paintings, line drawings, wall engravings, and rare clay engravings. Stalagmites reach up to the ceiling with tremendous height and the main cavern is a staggering work of natural beauty. Both Celtic and Visigothic populations also trod the valleys and mountains of the Sabarthès, and the layers of history in this area are both rich and shrouded in a thick layer of myth.

During the Medieval period ‘heresies’ were abound, and the tolerant attitude found in the lands of Occitania allowed several of these beliefs to flourish and take root. The most infamous and certainly the most controversial was the Cathar heresy, a mixture of Gnosticism, Dualism, Christianity and several other (possibly older) philosophies that created a unique faith the flourished in the shadow of the Pyrenees. The relatively swift rise and subsequent destruction of the Cathars (thanks primarily to the Albigensian Crusade, a mixture of territory/wealth acquisition, power expansion and orthodoxy) has given rise to a vast body of myth surrounding their beliefs, practises and the ‘secrets’ they might have known, not least with reference to the Holy Grail. Yes, it’s going to be ‘one of those’ articles!

The physical traces of the Cathars can be found in the Sabarthès. Many a castle in the wider region was held by a lord who sympathised with the Cathars, and in the Sabarthès for example we find the beautiful ruins of the castle of Lordat. A stones throw away lies the beautiful walled Medieval town of Foix, jewel of the Ariege, whose lineage boasts the infamous Esclarmonde de Foix (1151 – 1215), daughter of the Count de Foix, recipient of the Cathar sacrament and a prominent figure in both real Cathar matters and the posthumous Cathar mythos. Just to the North lies the highly symbolic and forlorn ruin of Montsegur, whose legend has attracted countless treasure hunters, tourists, curious souls and Grail seekers (including the elusive ‘Polaires’ in the 1930’s). Further to the North, beyond the boundaries of the Sabarthès one finds the infamous walled citadel of Carcassonne, the beating heart of the Cathar cause. Within the embrace of the Sabarthès lie the fortified caves of Bouan, which acted as the last bastion of the Cathars after the fall of that doomed castle, perched high on its rock. Several fled through hidden paths across the Pyrenees to escape the fate that awaited heretics, finding sanctuary in Catalonia. Perhaps some even used the valleys of Andorra as an easy crossing?

To return to the Sabarthès and the legends therein, the publicising of the myths surrounding Cathar secrets and mysteries in the canton was first driven by the research of historian Adolph Garrigou (1802 – 1897). Nicknamed ‘the patriarch of the Sabarthès’ by locals, he lived in Tarascon in the Ariege, and one of his particular bugbears was the tyranny and oppression of the Roman clergy shown towards the religious and patriotic ‘martyrs’ of the Cathars. Later in the 19th century another historian was born, Antonin Gadal (1877 – 1962), who lived next door to Adolph, and he learnt much from the ‘patriarch’. Garrigou would often ask Gadal to read him stories from his vast library, and so Gadal become invested with a great love of the Cathars and their mysteries – so much so in fact, that he dedicated his life to studying and protecting what he felt were both the physical and spiritual traces they left in his local landscape, the Sabarthès. He spent the vast majority of his life exploring the caves, forests and hills in search of Cathar influence, and claimed to have discovered a variety of locations he believed were linked to the processes of initiation for Cathar ‘perfecti’ (priests). In particular he was drawn to the caves of the Sabarthès (sixty of which he owned), including those of Ussat, Ornolac and Bouan, the Lombrives, Fontanet, Ramploques, and the ‘cave of the Hermit’ (identification unknown). In 1931, he met the extraordinary character Otto Rahn, a German archaeologist who was hugely drawn to both the Parzival epic by Wolfram von Eschenbach and the Cathar Grail mysteries. It was he who made famous the now-popular link between Montsegur and the ‘Montsalvatge’ or ‘Grail Castle’ found in Parzifal. Regardless of any political allegiances Rahn may or may not have had, he is an important figure in this area due to his research and propagation of the connection between the Grail, the Cathars and the Sabarthès canton in particular.

In particular, Rahn (with the initial help of Gadal) toured the Fontanet cave, a well-known prehistoric grotto which both gentlemen believed to contain an ‘altar stone’ used by the Cathars, the Bethlehem cave which they believed contained a pentagram stone (see photo), and the Lombrives cave, which Rahn claimed contained a variety of Cathar and Templar graffiti (links found at the end of this article). In addition, in his book ‘Lucifer’s Court’ Rahn writes of local legends in which a forest near Montsegur contains a great vault, within which lies an enormous treasure guarded by vipers, a lake beneath the nearby peak of St Bartholomew in which the treasure of Montsegur was thrown. This book, whatever the veracity of the information within, is beautifully written, and captures the dreamlike quality found in the landscapes of the region. Aside from Rahn, a great many local aristocratic and international figures became fascinated by the region and the work of Gadal, and a circle of study emerged within the Ariege, focussing on the Sabarthès investigating Cathar mysteries, both ‘uncovering’ and perpetuating further the Cathar-Grail legends and folklore that is so heavily imbued in the region today, to say nothing of nearby Rennes-le-Chateau and its alleged Magdalene connection! 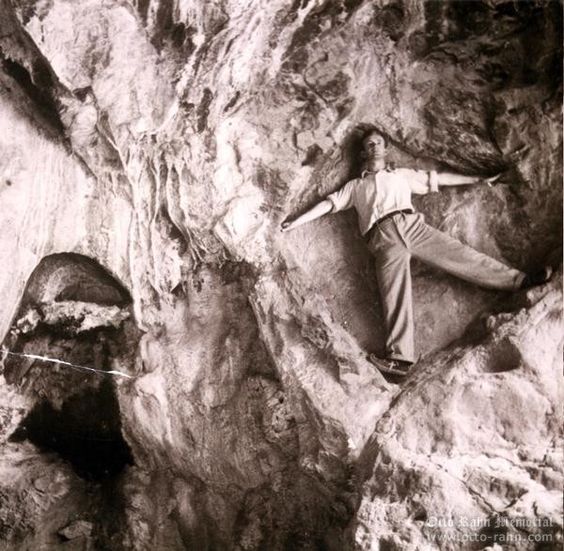 (Otto Rahn in the ‘Pentagram Stone’)

It is important to recognise the weight of myth, and the weight of this Cathar connection and the hint of the Grail drives vast quantities of tourism within the Ariege and the Aude each year. Aside from this purely economic aspect, these legends and alleged connections do tend to get under one’s skin, no matter how hard-boiled and pragmatic one might be, when presented with the caves, castles and forests of the Sabarthès. When one is there, it becomes obvious how this landscape, so littered with remnants of the past both physically and culturally, could endow those who come here with a sense of the ‘other’, and a willingness to accept, if only for a moment, the prospect of mysterious truths hidden within the valleys and lakes of this numinous canton.

Introduction to the work of Antonin Gadal:

An excellent article for the fortified caves and castles of the Sabarthès (in French):